What is a foundation sump pump? 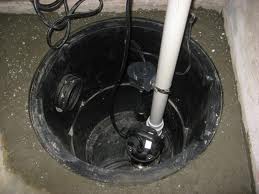 Where does my sump pump discharge to?

Weeping tiles collect the water that has made its way into the ground.  Some weeping tiles are connected to a sump pit.  When the sump pit fills with water and reaches a predetermined level, the sump pump then turns on and discharges the groundwater either directly into the storm sewer system or through a pipe in the wall of your home into the yard, away from the foundation.

Sump pump discharge with splash pad.  Note the proper grading away from the foundation.

­A sump pump usually stands in a sump pit — a hole with a gravel base about 2 feet (60 centimeters) deep and 18 inches (45 centimeters) wide — dug in the lowest part of your basement or crawlspace. As the pit fills with water, the pump turns on. It moves the liquid out of the pit through pipes that run away from your home to a spot where the water can drain away from your foundation. The pipe usually has a one-way valve called a check valve at the pump end to keep the water from flowing back into the pit.

Most sump pumps turn on automatically through a float activator arm or a pressure sensor. The pressure sensor works just like its name suggests: Water exerts more pressure on the sensor than air does, which causes the pump to activate. The float activator works a lot like the one in your toilet tank. A buoyant ball floats on top of the water, manually moving the arm as the water level rises. You can also buy a manually operated pump, which works only when you decide to turn it on, but these aren’t as common because of their lack of convenience. Automatic pumps also have an option for you to activate the pump if the float arm or sensor should fail to work.

The typical home sump pump uses a centrifugal pump to move water. When the motor is on, it causes a screw- or fanlike device called an impeller to turn. Using centrifugal force, the spinning impeller forces water toward the sides of the pipe, creating a low-pressure area at its center. Water from the pit rushes to fill the void, and the impeller’s spinning action pushes it out through the pipe.

Sump pumps for home use are powered by electricity and use standard household current, so they don’t require specialized wiring beyond a grounded outlet. Since the pump is always in or near water, it’s a good idea to have a ground fault circuit interrupter (GFCI) on the outlet to prevent accidental electrocution.

There are two primary sump pump designs, both of which are about 2 1/2 to 3 feet (76.2 to 91 centimeters) high. A submersible pump rests in the water. It’s encased in a waterproof housing, with the pump itself at the bottom and the outlet pipe near the top. A flat screen or grate covers the bottom of the pump to keep out debris. When the pump turns on, water is sucked up through the grate and routed into the pipes and out of your home.

The other common type of sump pump is the pedestal pump. Pedestal pumps look something like a long stick with a fat head. The pedestal keeps the pump out of the pit, away from the water even when the pit is full. An inlet pipe reaches down into the bottom of the pit to draw the water out. Since the motor and pump are out of the water, pedestal pumps are usually louder — but less expensive — than submersible pumps.

Read on to learn whether you need one of these pumps in your home and what to do to keep it working once it’s installed.

"They helped us make our home safe and that meant the world to us."
Paul Marshal.
© Copyright Ottawa Foundation Crack Repair | Design by Dara Shabnam
Back to Top